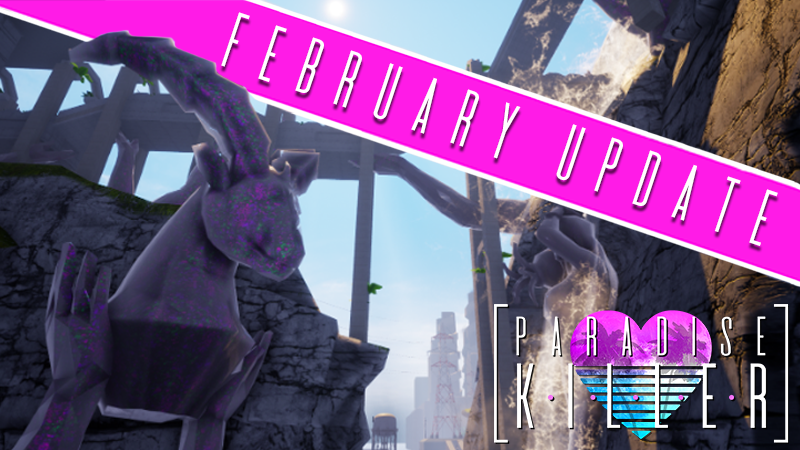 February has been all about optimisations and improving the player experience. We want the game to run on loads of different systems so we have been implementing lots of ways to get the frame rate up on very low end systems. We’re making good progress; culling and LOD settings are being tinkered with, meshes are being optimised, better streaming is being implemented and a whole bunch of other very detailed things that Phil is doing an amazing job chasing down.

We also bulldozed a new gorge through the centre of the mountain to make traversing the island easier. It has now become one of my favourite areas in the game.

We also put in a load more collectables that explain more about the terrible gods that came from beyond the stars and enslaved the Earth in man’s prehistory. We hope you enjoy learning about the tentacled armed goat god from a forgotten area of antique space when you play the game!

Our composer, Barry “Epoch” Topping, has been cranking on the music and SFX. Barry says his “limiters have been released” and you can tell, the music is killer. We can’t wait to share some more of it.

Rachel “AbKi” Noy has been working on some Top Secret art stuff which is allowing us to dramatically improve the major crime scene in the game. Unfortunately that can’t be shown yet but we’re very excited about it.

And finally, our amazing character artist Curran “Gigalithic” Gregory has been doing new body variants for the player character Lady Love Dies. One of these can’t be shown as it is a major spoiler but here’s her accusation pose. I got sent this late at night and couldn’t stop looking at it instead of going to sleep.

See you next month pals!